COVID-19 forced several companies to temporarily shut down, and ‘The Walt Disney’ was among them to shut down the gates of Disney theme parks across the world for the safety and well-being of guests and employees. A similar trend was noticed on Twitter, where influencer conversations on ‘The Walt Disney’ spiked more than 300% during February-May 2020, over previous 120 days, reveals GlobalData, a leading data and analytics company.

In March, a huge conversation spike among influencers was noticed when the company decided to halt and close its 11 Disney theme parks and Disney Cruise Line across Asia, Europe and North America due to the spread of the pandemic.

Another spike was noticed in February when company’s CEO ‘Bob Iger’ stepped down from the role effective immediately and assumed the post of executive chairman until his contract ends 2021. ‘Bob Chapek’ was subsequently appointed as the new CEO for the company, but the news was a big surprise for the markets as the company’s stock price fell by nearly 4% following day.

Prashant Saxena, Influencer Expert at GlobalData, says: “In an effort to prevent the spread of COVID-19, Disney shut down its theme parks, theatres, cruise vacations and resorts across the globe. This caused 91% drop in profits for the company during the first three months of 2020 and forced it to furlough more than 40,000 union workers temporarily.” 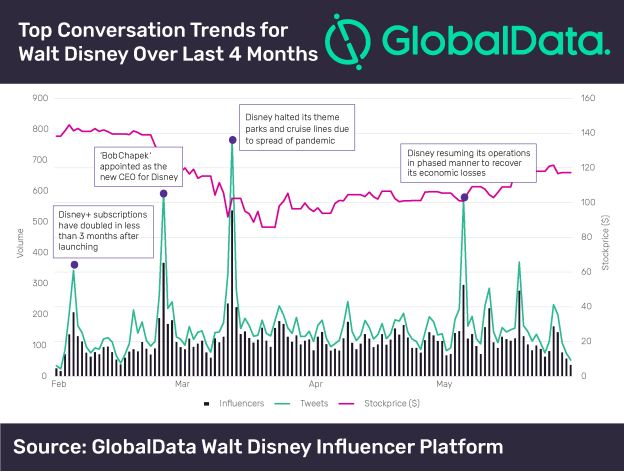 In May, the company started phased reopening process with Shanghai Disney resort, and led to a significant spike in conversations as after months of closures this news came as a light at the end of the tunnel for park fans who are anxious to get back to their beloved parks.

Mr Saxena concludes: “After months of being closed, the company has decided to begin reopening theme parks in a phased manner from July onwards. However, at this point, it is difficult to estimate whether people will come rushing to theme parks when gates reopen or they will be hesitant to return to crowded places.”